Excellent possibility for gyrocopters and helicopters in any flight regime.

Newly developed parachute rescue system designed for use on gyrocopters and light helicopters has been tested and is available commercially.

New patented system from Galaxy GRS s.r.o. enables a parachute rescue of gyrocopters and light helicopters from 60m above ground at the forward speed of 60 km/h and higher and in hover at very low forward speeds already from 110 m above ground.

The system works reliably on all Galaxy GRS produced rescue ballistic parachute systems series 3, 4, 5 and 6 at speeds up to 270 km/h and helicopter weight up to 750 kg.

The Galaxy company worked on development of the the new parachute rescue system for gyrocopters and helicopters intensively since middle of 2011.

The three year development has been successfully completed during a test at Milovice airport in cooperation with the gyrocopter company of Mr. Rosťa Bauer Aviation and his co-workers. They prepared a testing undercarriage and all components, including auxilliary engine driving an original rotor head, used for starting up and to keep the rotor turning at optimal 280 turns per minute, so the real flight was simulated. 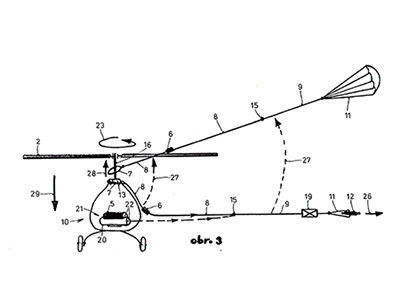 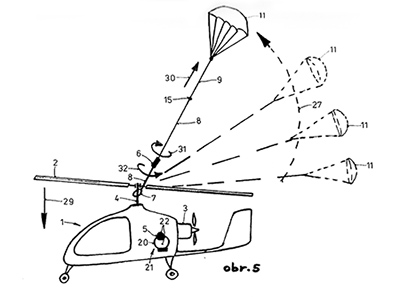 For the real installationon Gyrocopter it is possible to install the system within the range of 45-90 degrees to the lengthwise flight axis and within the range of 0 to 20 degrees up from the horizontal flight level. During a real use of the system, the gyrocopter will always descent faster than the developing parachute canopy of the rescue system activated/ fired horizontally sideways, so the main sling of the rescue system always passes between the rotor blades without causing a damage.It is because the angle of interference between the blades and the rescue system sling has almost a same. This unique system of attachment between the rescue parachute and gyrocopter/helicopter is patented by Galaxy GRS s.r.o.

High effectivity of the parachute rescue system is possible due to the design of Galaxy GRS system using speed extracting of the parachute, fitted in a solid textile tube or box, by means of rocket engine with the kinetic energy of 1,4 ton.This guarantees safe opening of the parachute canopy in the split of second at the distance of ca. 20m from the machine. 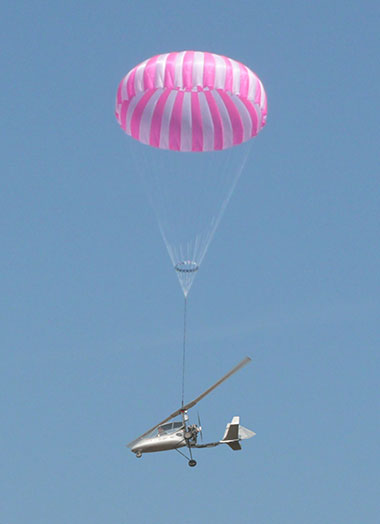 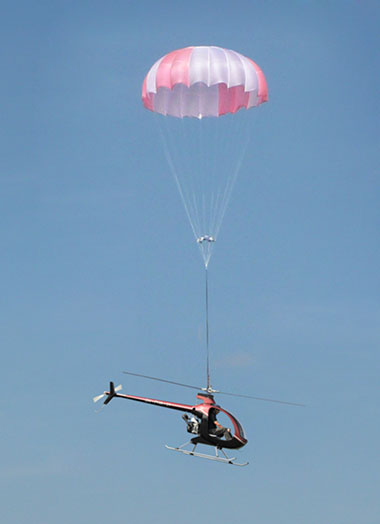 Gyro in Hungary at the school Attila Filipovit